The theme of our project is to aim to create an art exhibition that can be experienced in order to transmit and help the representation of socially marginalized groups in today’s society – the Drag Queen community. Our inspiration and motivation come mainly from three aspects:

We will make the corresponding artistic installation through the understanding and in-depth experience of this community. The final presentation and exhibition will be decided to depending on our budget and sponsorship also the digital technology used.

Drag queens are not only a marginalized social group, but they are exclusively part of a marginalized community also. the representation of drag queens within contemporary society has progressed towards positivity, yet there is a large sting associated with the art of drag – many people do not see drag for what it really is. marginalized groups are often penalized and criticized for their expression of individuality, drag queens and the art of drag not being excluded. the theme is centered around drag allows for our exhibition, and a group project to enlighten individuals about the importance of drag. the history of drag is of utmost importance, and should be respected by individuals – it is an art. not only an aesthetically appealing art, but an art of the expression of individuality, and the art of condemning social norms surrounding gender and sexuality. the ambiguity surrounding drag and its purpose is still vague, the theme focus is therefore intentional is explaining the whole community of drag. our analysis of past material and present-day material will allow us as a group to present the history of drag culture and its provenance within society. mainly qualitative research, this will enable our exhibition and final project to convey a personalized and objective view of the community itself – we will be able to vaguely conclude on the changing nature of social pressures, norms, and values that society has on the drag community.

Drag queens are often depicted as glamorous, perfect within their own self. though this may be true to some extent, the community has faced more issues, the majority which could impact and ruin the livelihood and wellbeing of the individual. Paris is burning is a great example of the tribulations experiences by, not only the LGBT community but the drag scene also. the influence and impact HIV and AID’s had on the community is still prevalent today – maybe more-so than previously. the hardships of the individuals within community break any other person within society, though people not in the community fear social rejection, those in the drag scene are social rejects, ranging from friends and aquatints to loved ones and family. this is where the strong familial bond of the houses within the community originates. within modern day society, we now question the boundaries of gender, and drag is a perfect way to condemn these social norms. they deviate, but they are not deviants – it is essentially a protest against the constraints of society. often drag queens are unable to provide for others and work multiple jobs in order to find financial, and social stability. drag queens are to be admired and praised for their art form, yet many people do not respect drag as an art, but as an entertainment – though it is entertainment, the art of drag is of utmost importance, the entertainment is a part of the art.

For this project, we will use VR glass (Oculus go) to let people create their own Drag styles.

And also we are going to build an environment, in this part, we use projection mapping.

Tools for the final Installation:

By both considering the first and second performances of our installation, we need some kind of modeling and animation tools, open-sourced codings, and virtual-reality-based designs. The followings are the software or physical designs for our project:

At our current stage, we’ve fixed some plugins and programming for those softwares and hardwares. 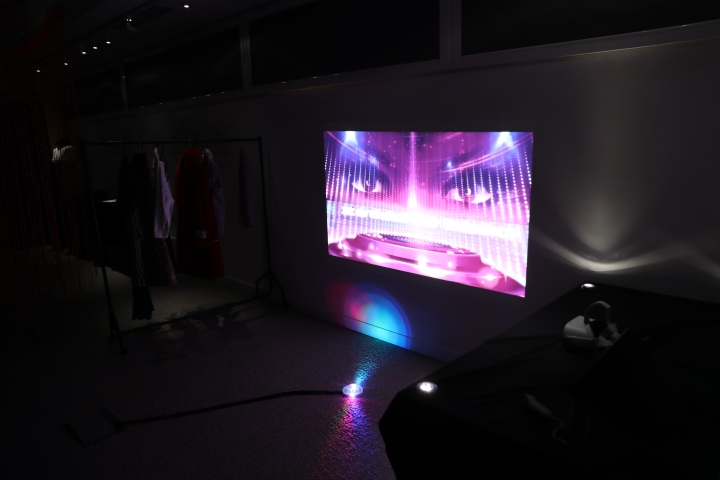